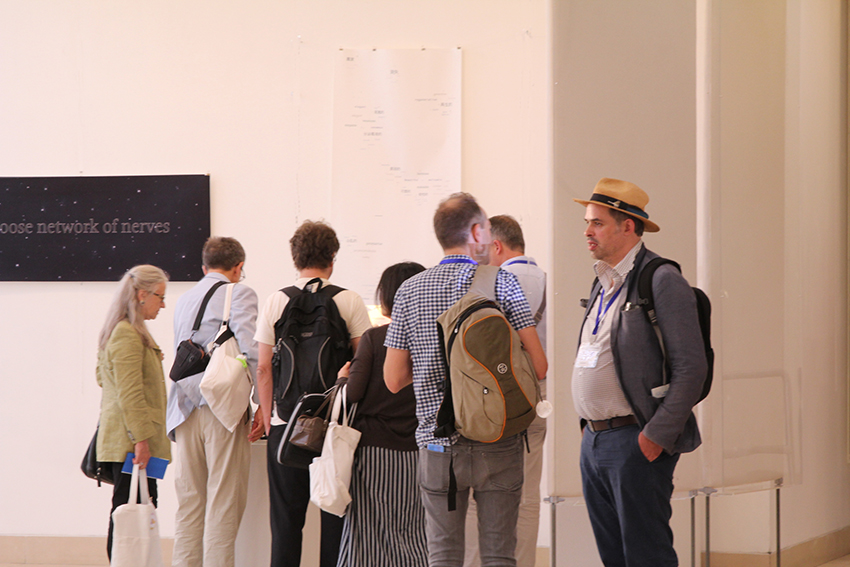 The first in a series of curatorial constellations and events, this exhibition and performance evening extends Dr Heather Connelly’s transdisciplinary research into art-and-translation, which she began during her practice-based PhD, Speaking through the voice of another, (Loughborough University 2015). It has been designed to complement and expand the Exploring Cultural Mobility through Visual and Performance Art panel convened by Gabriela Saldanha (University of Birmingham) and Cristina Marinetti (Cardiff University).

The exhibition includes work from established and emerging artists, curators, writers and researchers Bill Aitchison (UK/CN), Emma Cocker and Clare Thornton (UK), Heather Connelly (UK), Johanna Hällsten (SE/UK), Saskia Holmkvist (SE/NO), Rebecca Johnson (UK), Xiangyun Lim (SG), Marianna Maruyama (NL), Manuela Perteghella (IT/UK) and Ricarda Vidal (DE/UK), Annie Xu (CN/UK) and Solomon Yu, Jimmy Chan and Eddie Cheung (HK) and provides space for artists contributing to the panel to present their practice as objects, performances and documentation of events. Conference delegates are invited to encounter, experience and respond to works’ as opposed to relying upon a mediated (linguistic/written) account of the work through the voice of another. ‘Whilst the relationship between translation and the performing arts has become a popular field for investigation and translation studies has been undergoing a creative turn, there has been little attention paid to contemporary artists working with translation and interpretation within Translation Studies’. The panel and exhibition aims to ‘to open up a dialogue between artistic practice and translation so as to enable a more comprehensive exploration of the material and performative complexities of translation and interpreting, probing the potential of artistic practice to create new knowledge or present existing knowledge in a new light. The panel and exhibition offers a space where academics can respond to such artistic and inter-artistic practices, exploring the role of art in relation to current concerns in translation studies.’ (Connelly, Saldanha and Marinetti 2017)

Translation Zone(s): Constellations Hong Kong, provides physical and hospitable environment for artists and translators to engage in a critical dialogue about the potential of future international transdisciplinary research between artists and translators, and how contemporary arts practice can play a pivotal role within the research process.

The exhibition has kindly been supported by the University of Lincoln (UK), IATIS,
Hong Kong Baptist University and the Academy of Visual Arts. 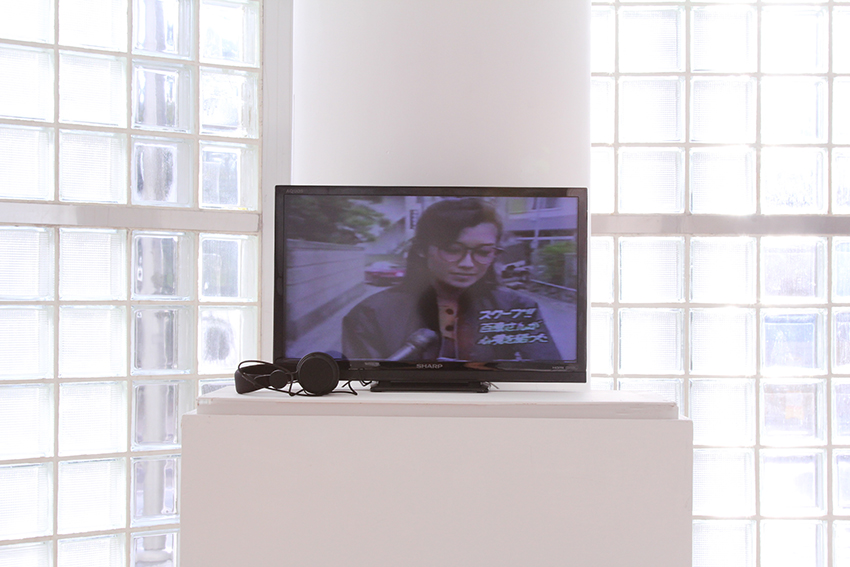 Marianna Maruyama – Loving with Both Hands 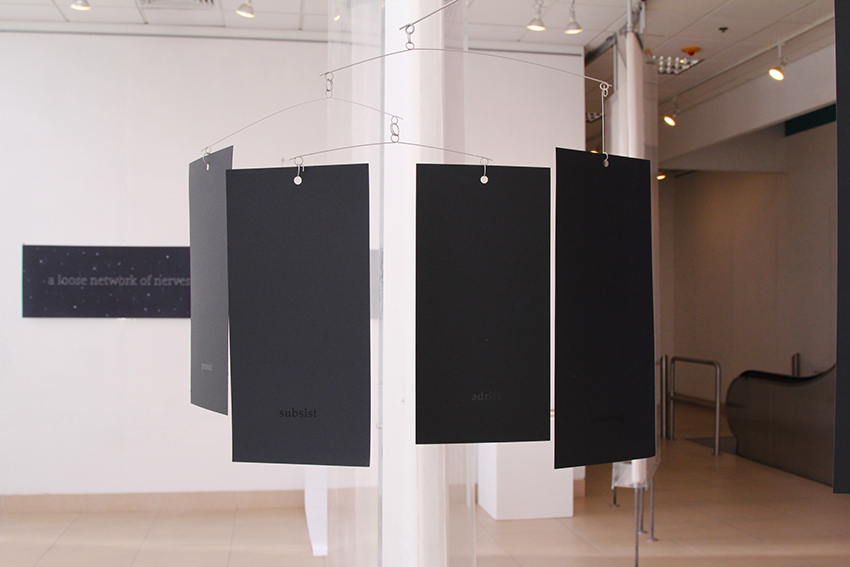 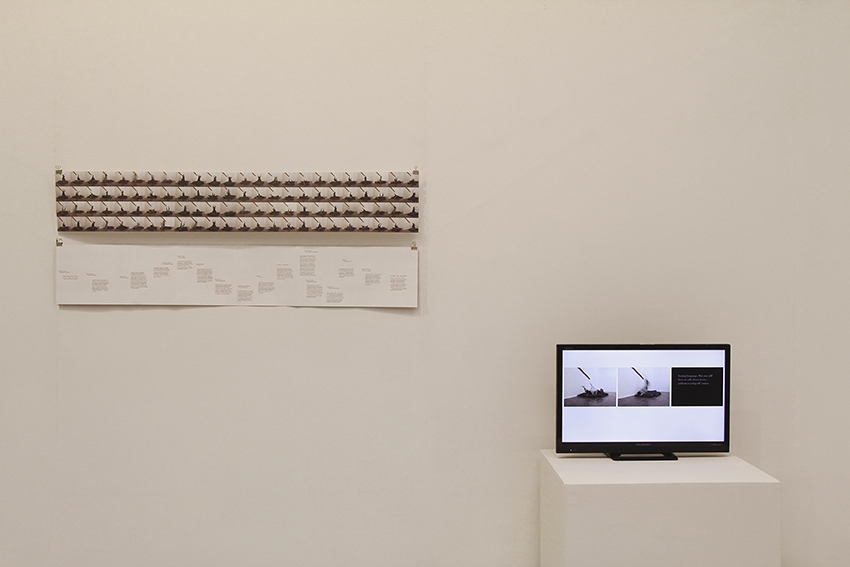 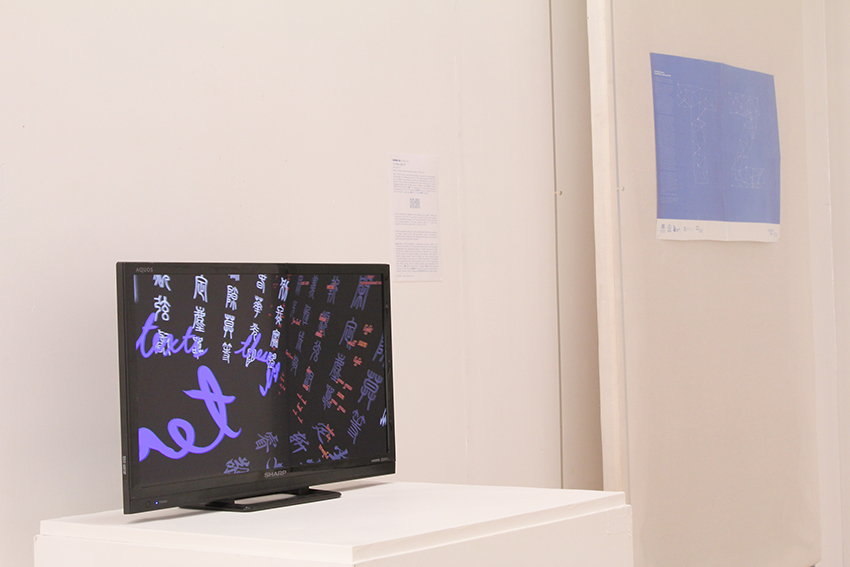 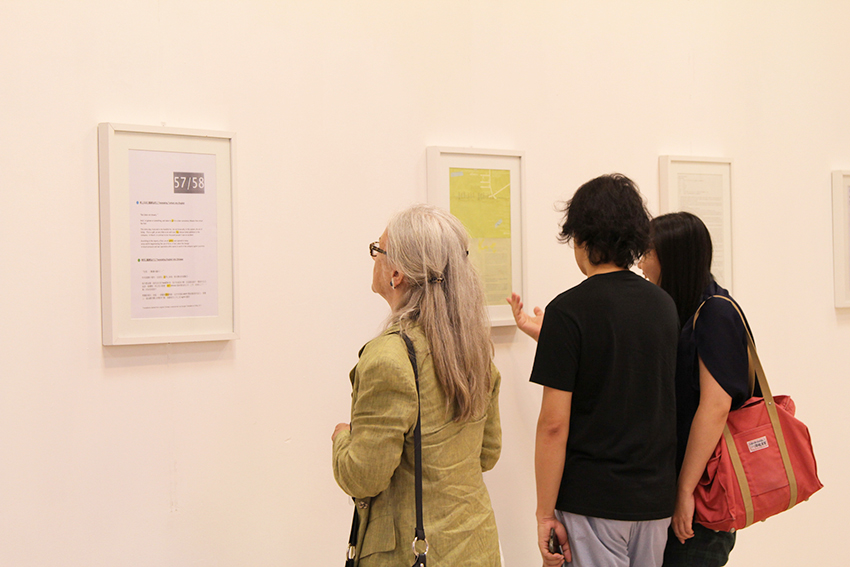 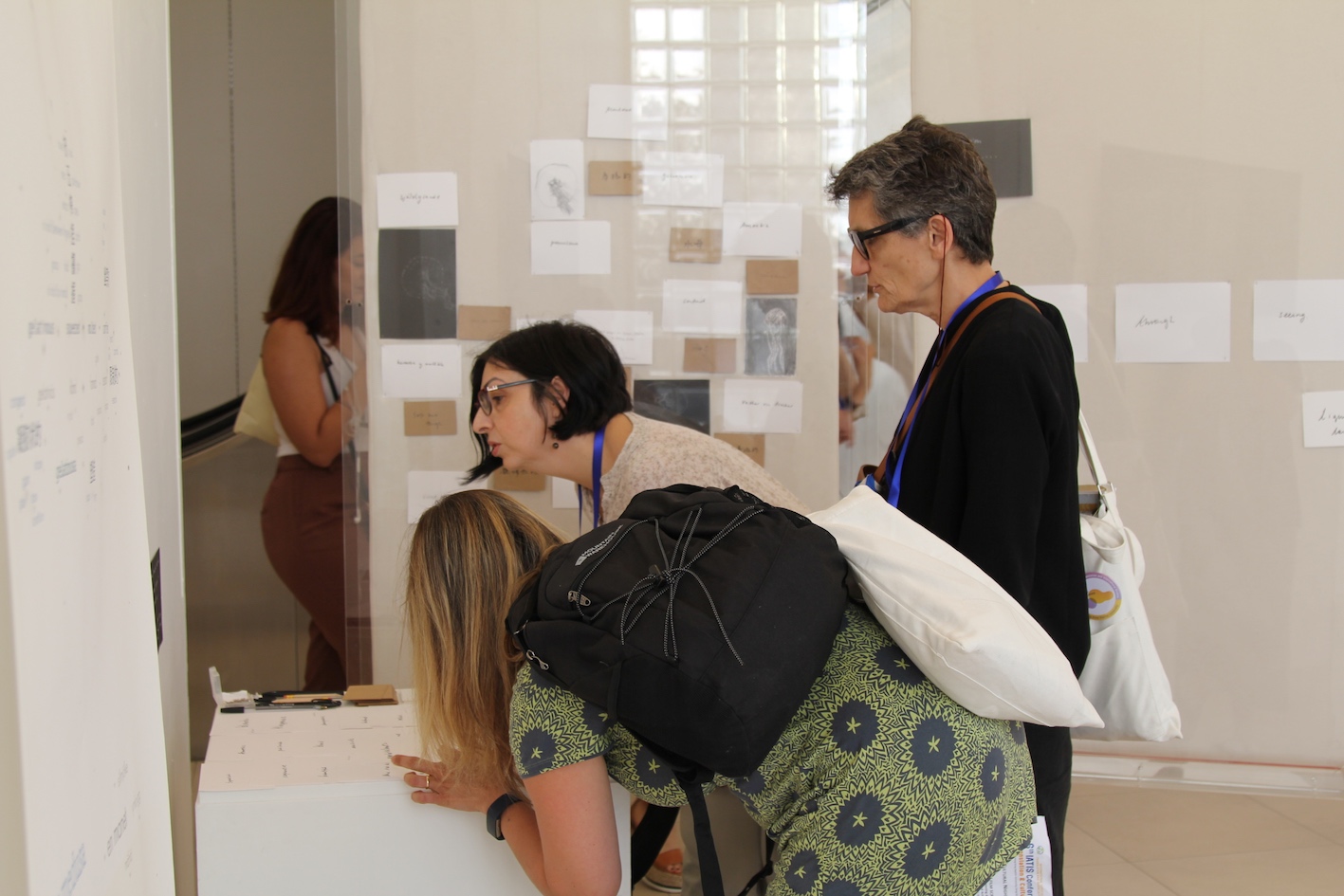 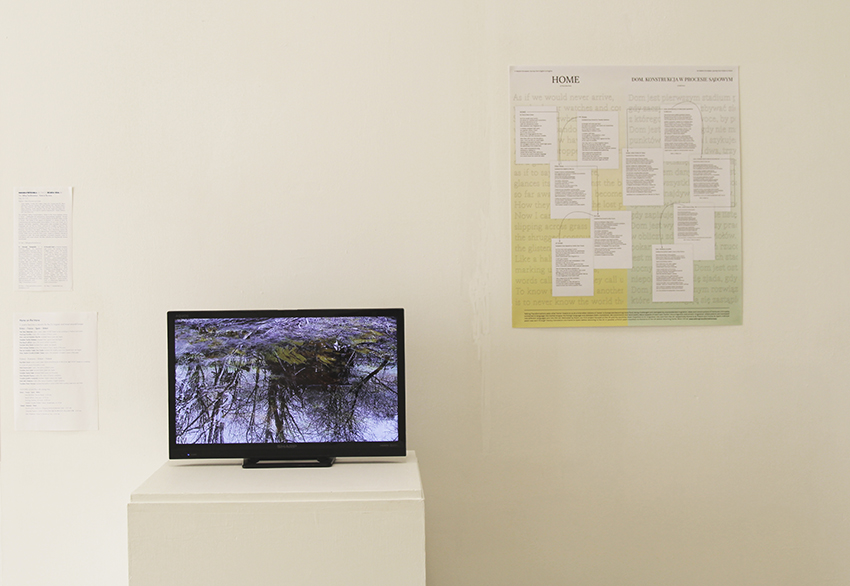 Further images of the exhibition, performance evening and talks can be seen by on the gallery page: http://www.heatherconnelly.co.uk/translationzones/?page_id=1251 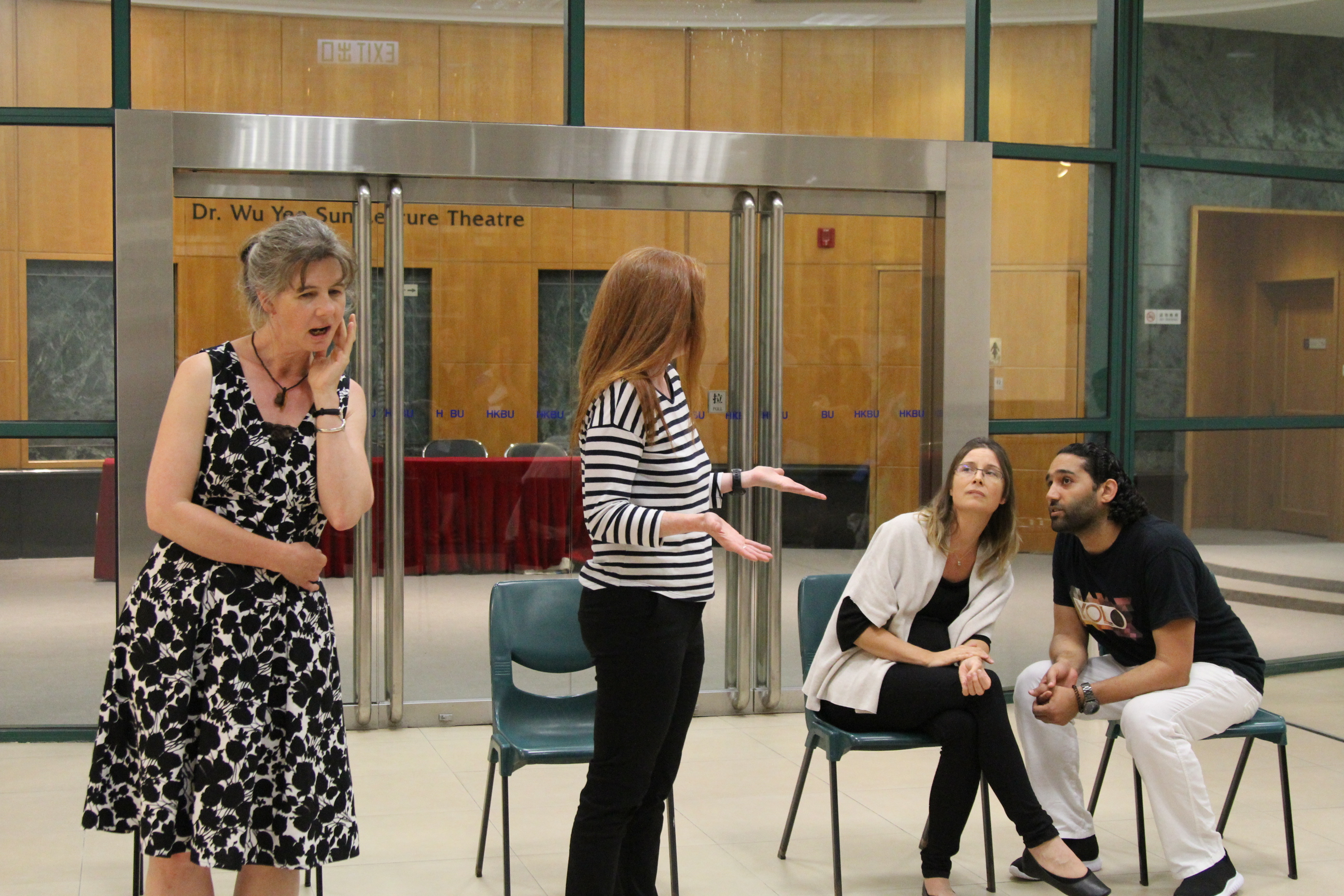 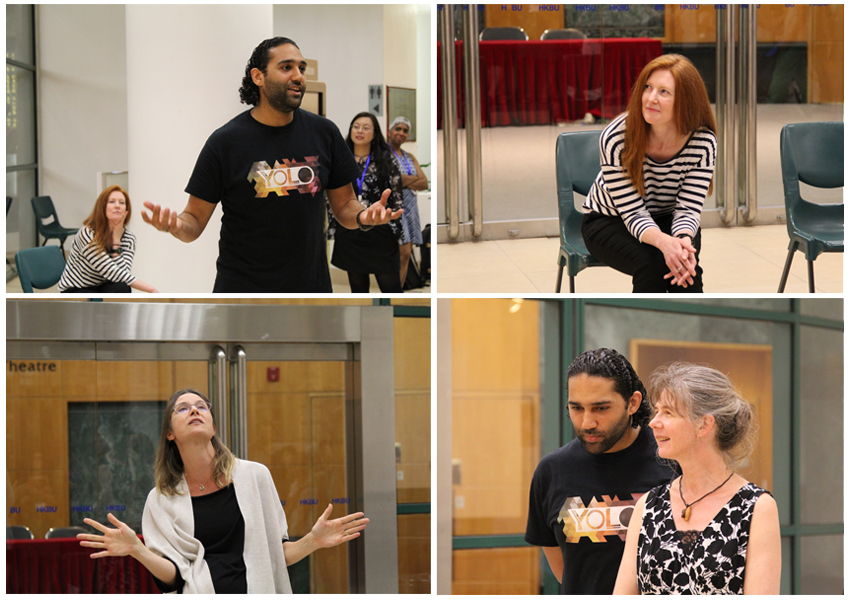 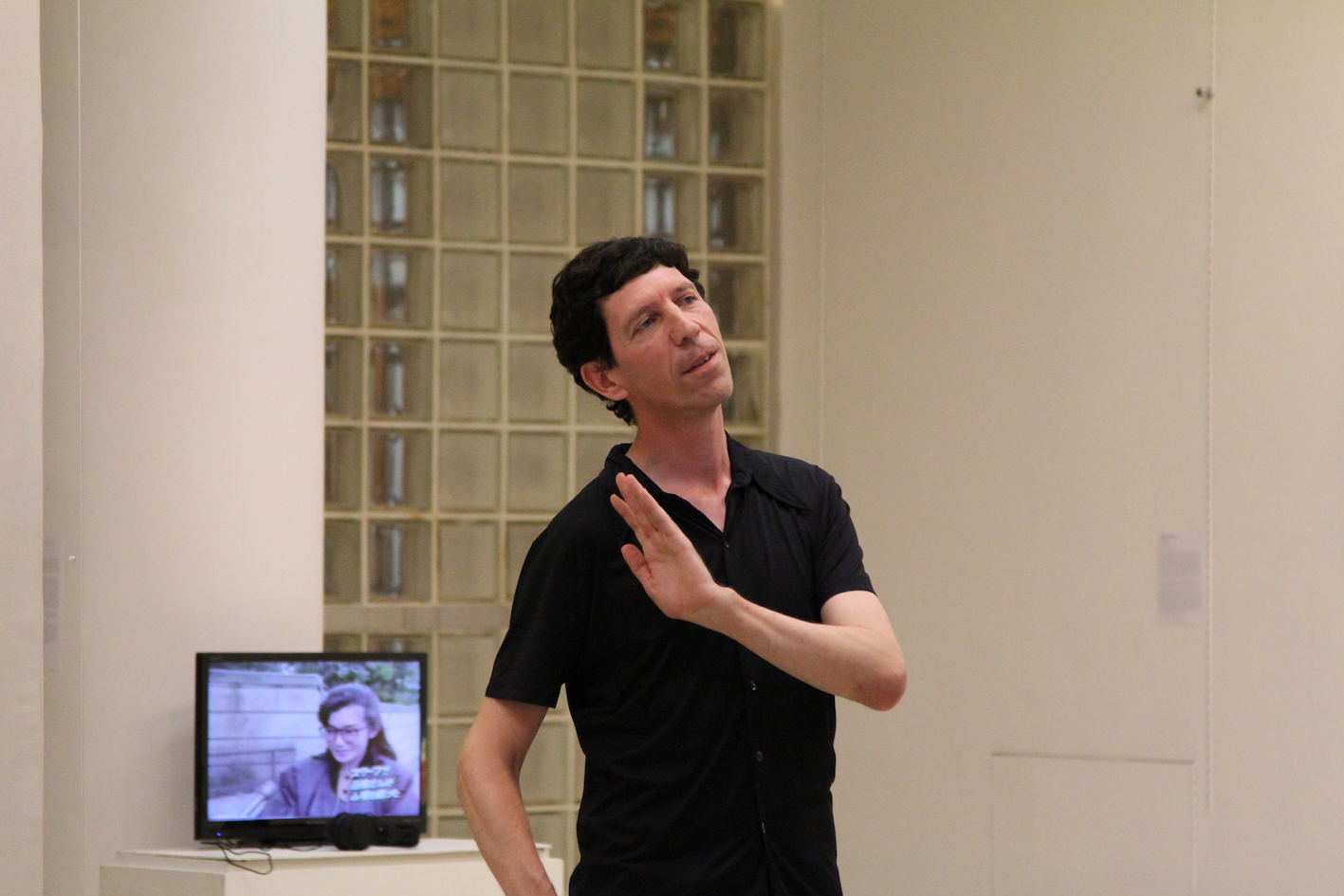 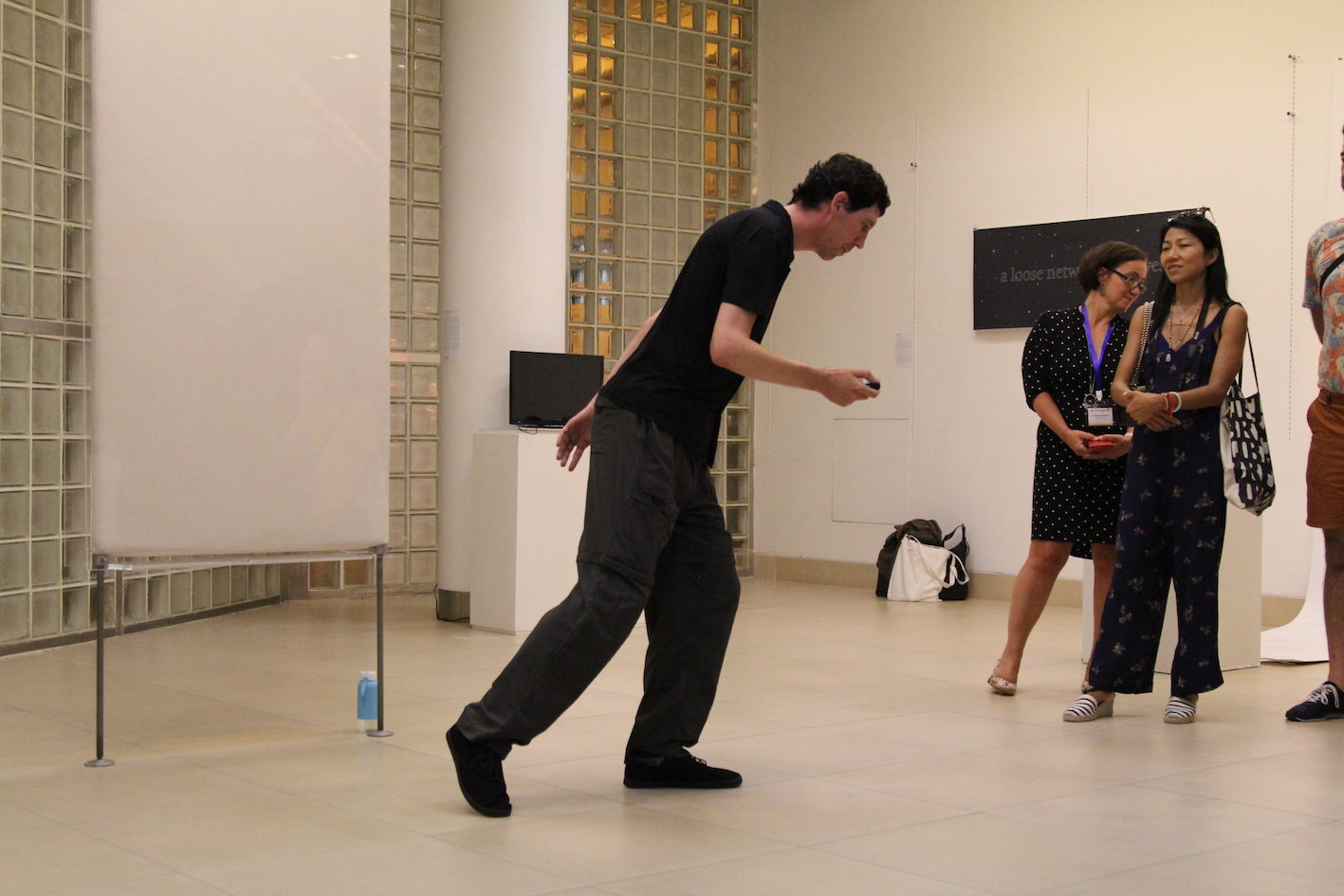 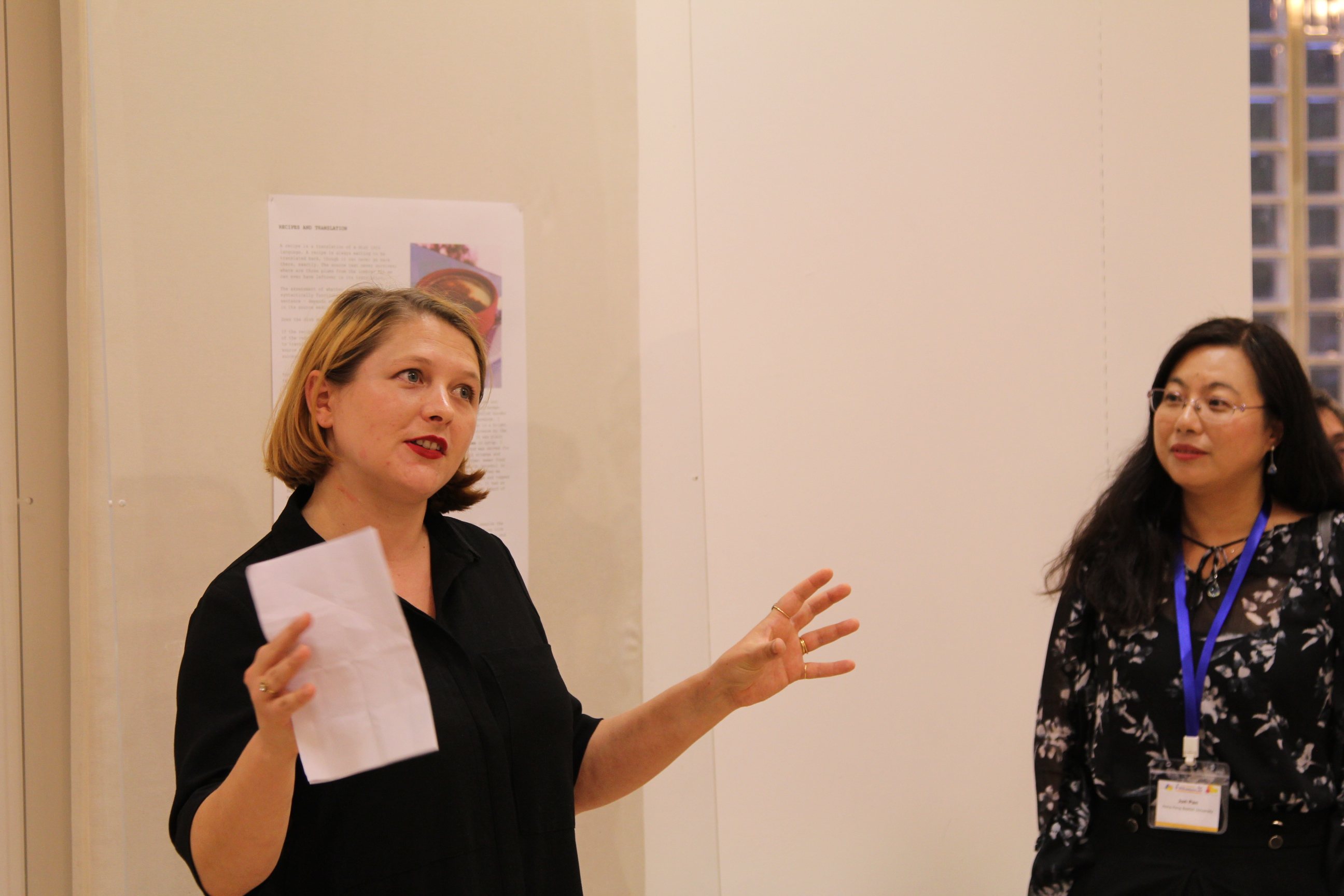 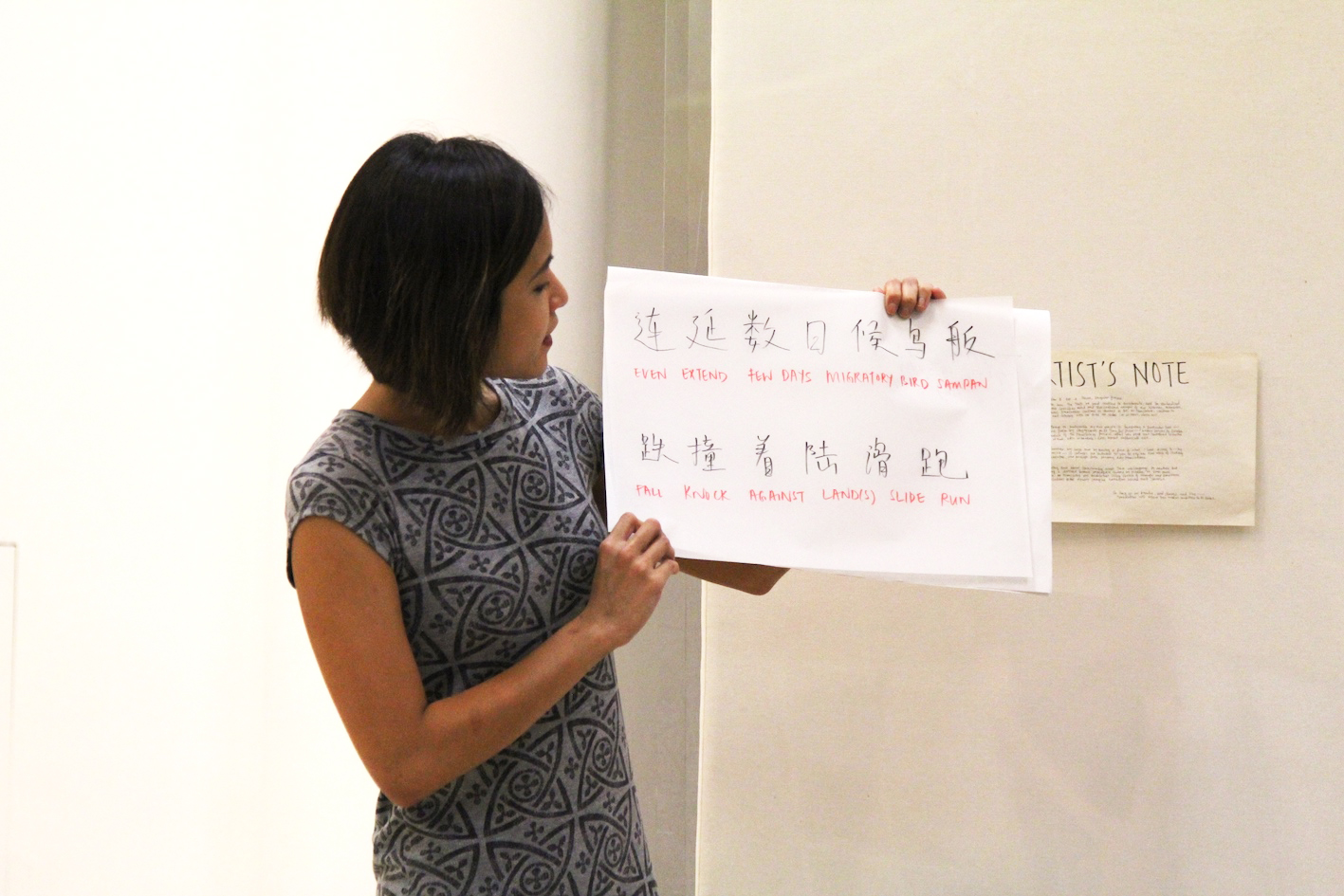 Heather has worked in collaboration with Vietnamese Graphic Designer Thuy Vo to create an Rhizographic printed poster/leaflet to extend the dialogue beyond the exhibition. 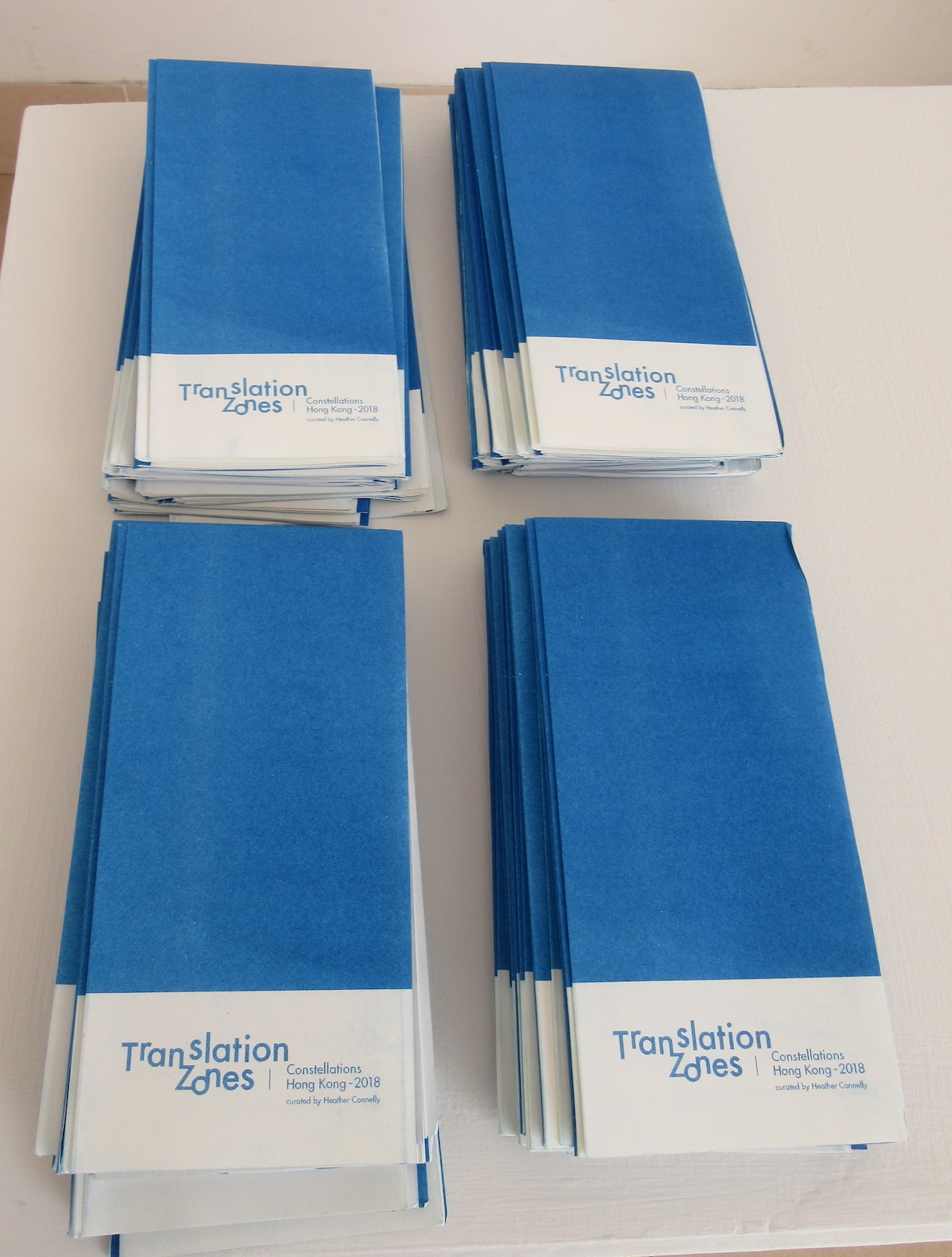 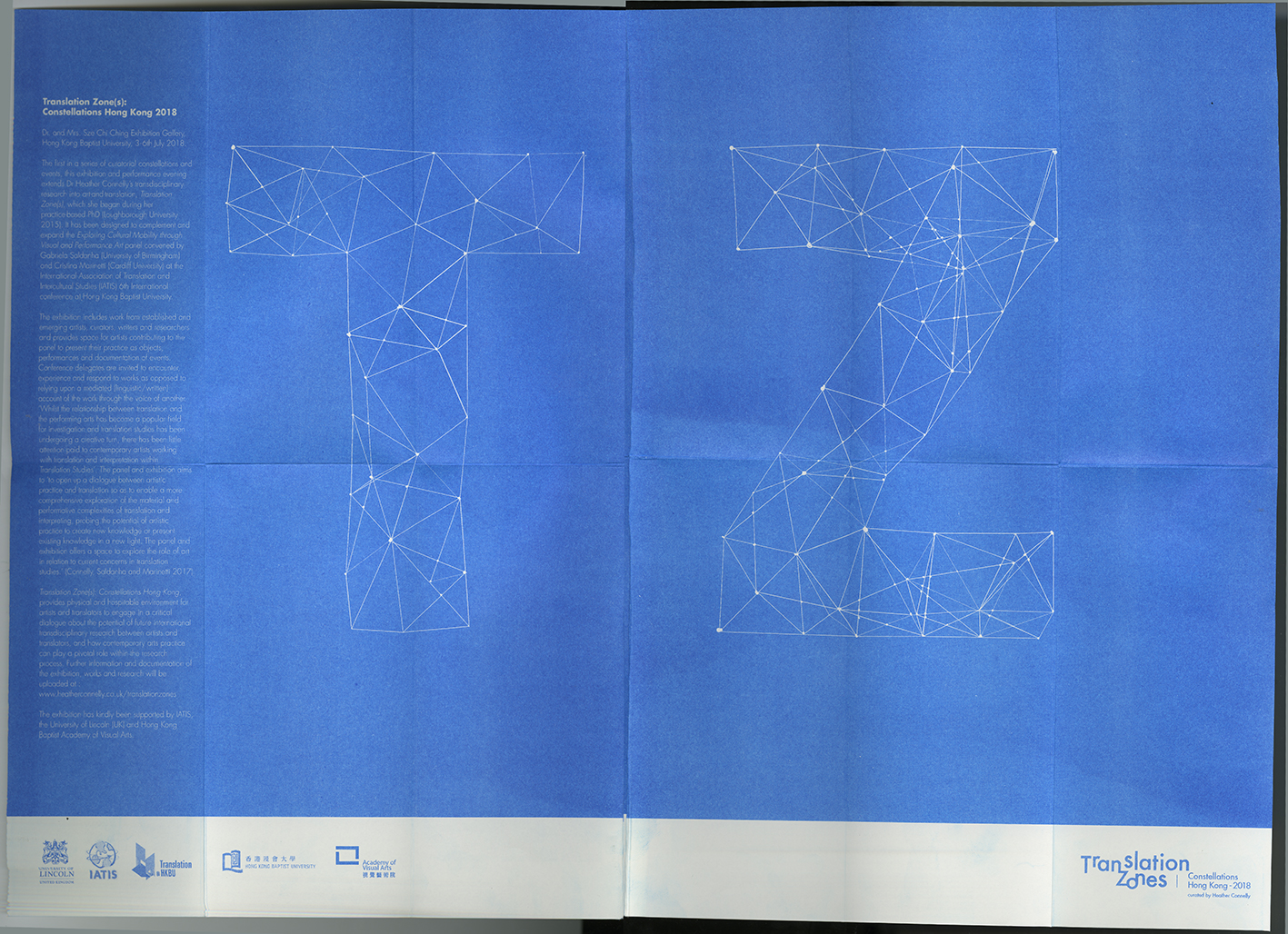 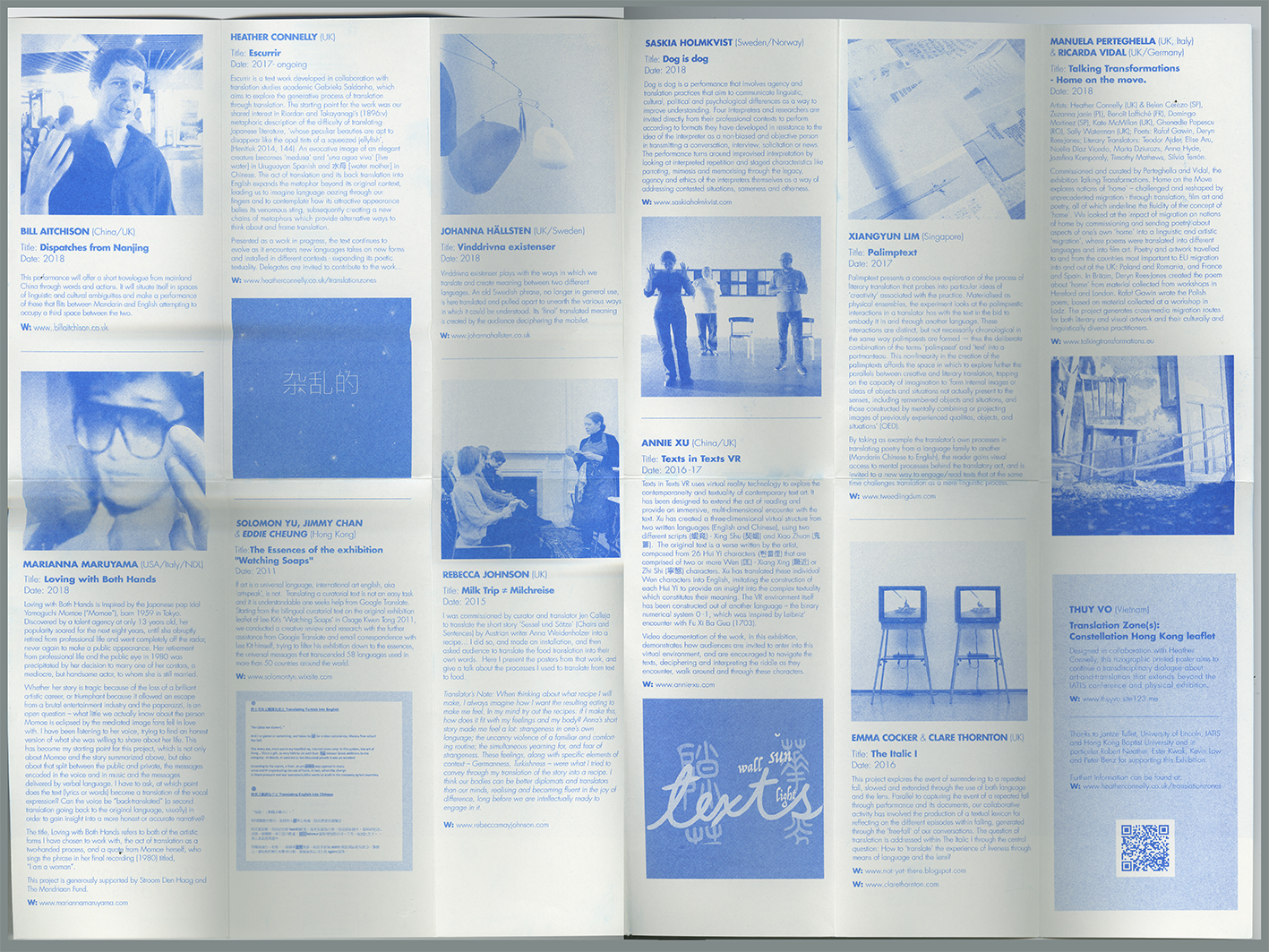 This limited edition leaflet was produced with assistance from Jantze Tullet (University of Lincoln). 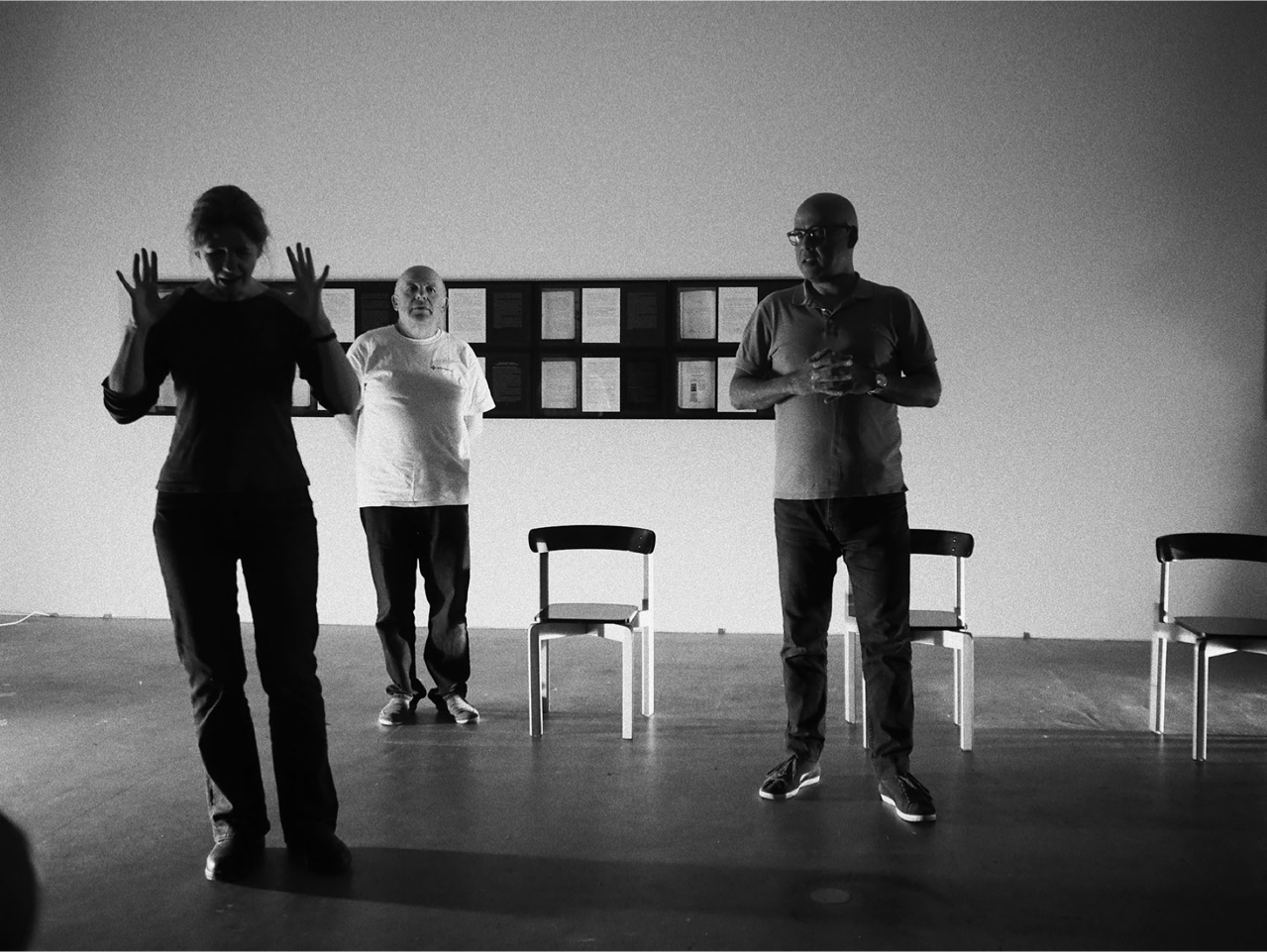 Swedish Artist and Professor Saskia Holmkvist at the Academy of Fine art, Oslo has invited 4 professional interpreters presenting at the conference to perform DOG IS DOG. A performance that involves agency and translation practices that aim to communicate linguistic, cultural, political and psychological differences as a way to improve understanding. The performance turns around improvised interpretation by looking at interpreted repetition and staged characteristics like parroting, mimesis and memorising through the legacy, agency and ethics of the interpreters themselves as a way of addressing contested situations, sameness and otherness. 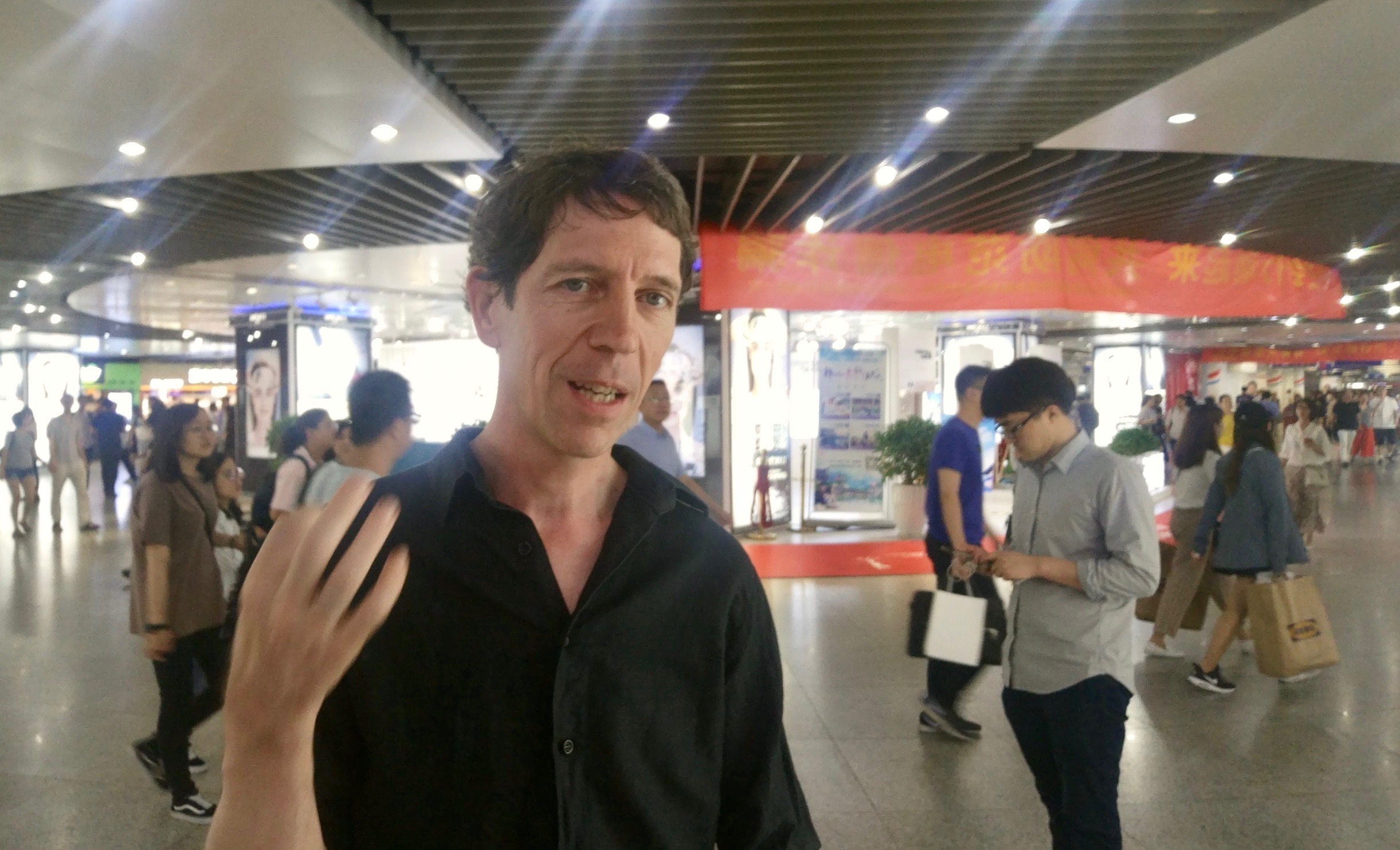 Bill Aitchison, a British inter-disciplinary performance artist, who is based in China, performs Dispatches from Nanjing. The performance offers a short travelogue from main- land China through words and actions. It will situate itself in spaces of linguistic and cultural ambiguities and make a performance of these that flits between Mandarin and English attempting to occupy a third space between the two.

Singaporean translator, Xiangyun Lim will present various iterations of Palimptext – a conscious exploration of the process of literary translation that probes into particular ideas of ‘creativity’ associated with the practice.

UK based writer, literary curator and creative practitioner, Rebecca Johnson, will present Milk Trip ≠ Milchreise – a short story that she translated into a recipe. Her talk will focus on the processes she used to translate from text to food.

Visitors will also have the opportunity to see works by  be one of the first people to see Marianna Maruyama‘s  Loving with Both Hands, which has its premiere in Hong Kong. The video was inspired by the Japanese pop idol Yamaguchi Momoe (“Momoe”), born 1959 in Tokyo. Discovered by a talent agency at only 13 years old, her popularity soared for the next eight years, until she abruptly retired from professional life and went completely off the radar, never again to make a public appearance. The title, refers to both of the artistic forms that Maruyama has chosen to work with, the act of translation as a two-handed process, and a quote from Momoe herself, who sings the phrase in her final recording (1980) titled, “I am a woman”. 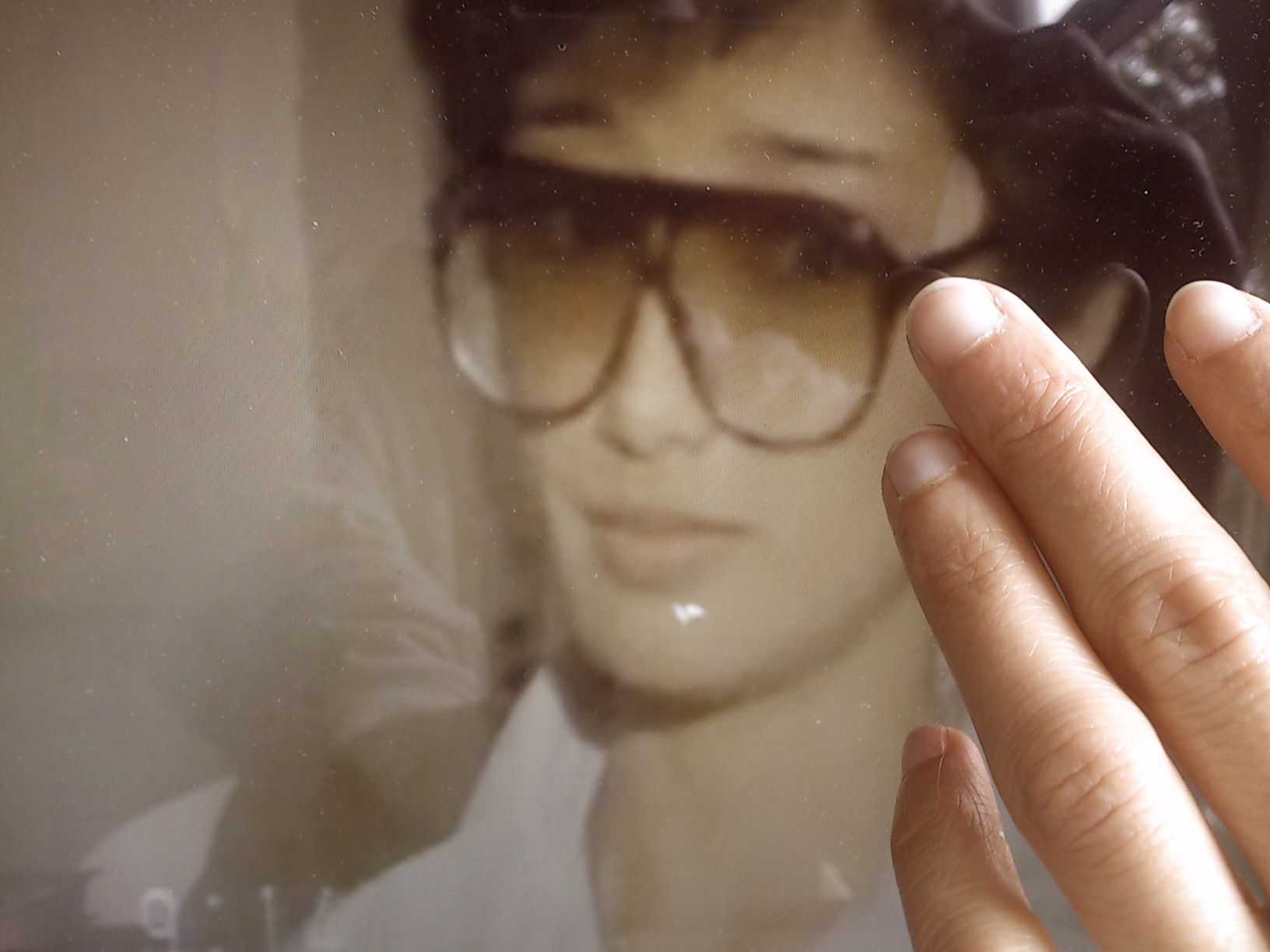 This project has been generously supported by Stroom Den Haag and The Mondriaan Fund.

UK based Swedish Artist Johanna Hällsten has created a new work Vinddrivna existenser for the exhibition, which plays with the ways in which we translate and create meaning between two different languages. An old Swedish phrase, no longer in general use, is here translated and pulled apart to unearth the various ways in which it could be understood. Its ‘final’ translated meaning is created by the audience deciphering the mobile. 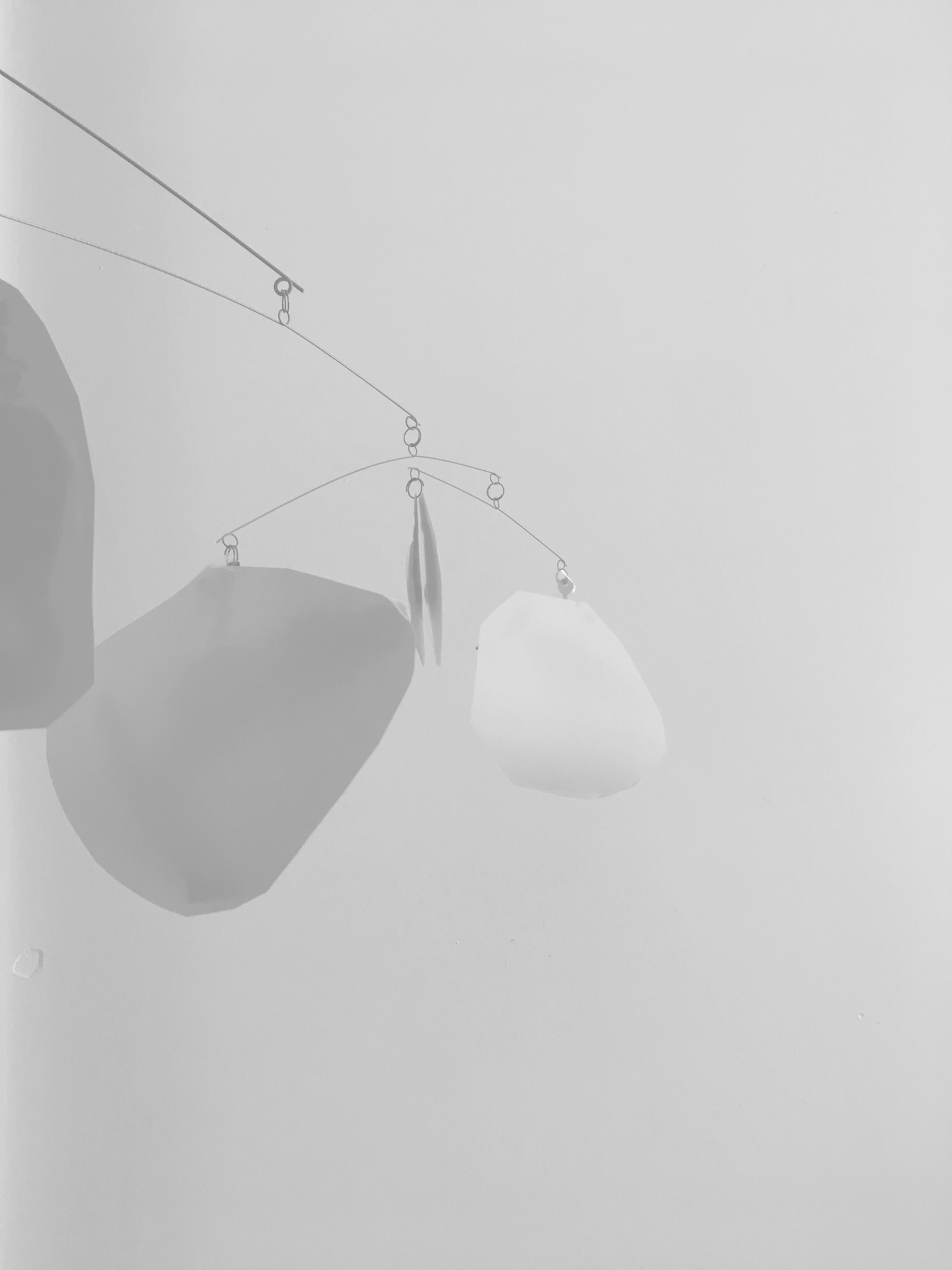 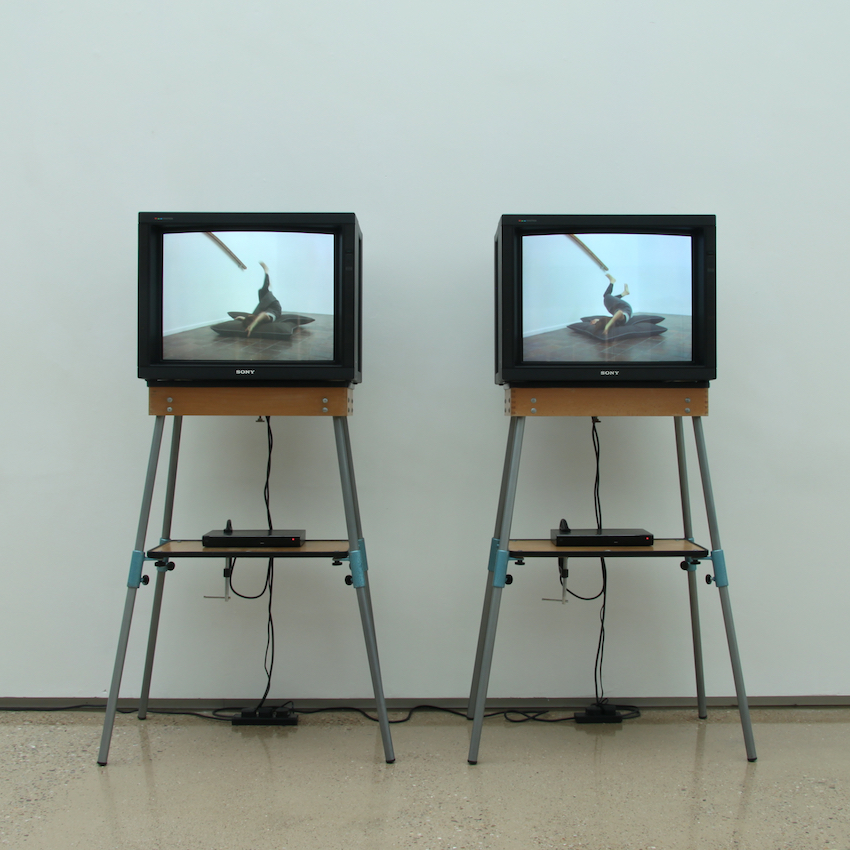 Emma Cocker and Clare Thornton‘s video, book and performance the Italic I uses the studio as a gymnasium, a testing ground for the live investigation of falling, slowed and extended through the use of both language and the lens. That addresses the translation of performance through various photographic and textual documents. It inquires ‘How to translate the experiential nature of falling as a force rather than simply representing its form as a visual event? How to translate the qualities of passage and the multi-, micro-temporal dimension of falling? How to develop a mode of linguistic translation — an alternative poetic textual lexicon — that embodies rather than describes the live experience that it seeks to articulate? What is at stake at the threshold where live and lens meet, in the interval between live performance and its translation through lens-based media- tion, between event and document? 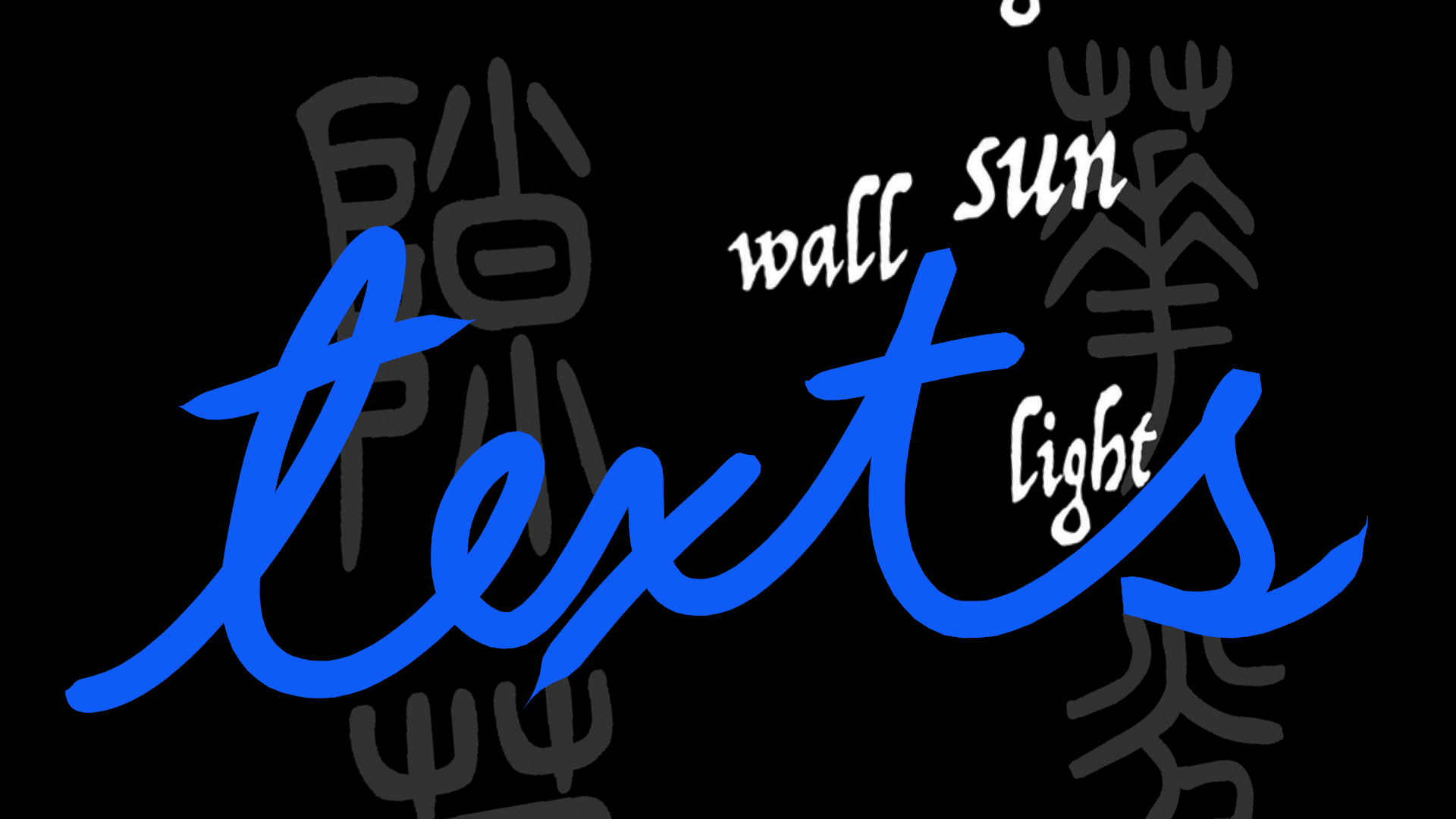 Chinese artist, curator, translator and PhD student Annie Xu, based in the UK presents video documentation of Texts in Texts VR , an immersive Virtual Reality work originally created using Occulus Rift technology. Xu has created a Poetic text to explore the contemporaneity and textuality of contemporary text art. It has been designed to extend the act of reading and provide an immersive, multi-dimensional encounter with the text. 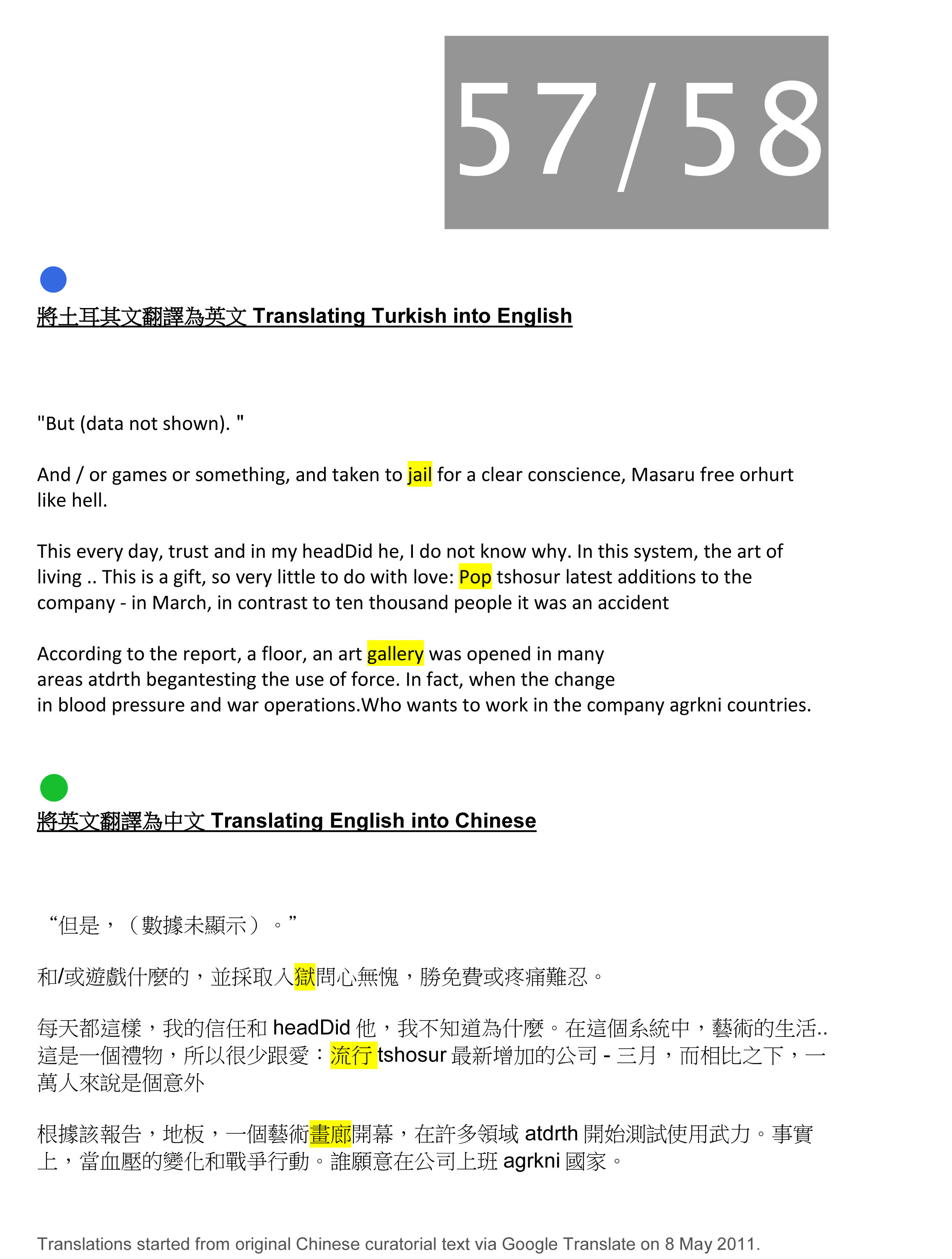 Hong Kong artists Solomon Yu, Jimmy Chan and Eddie Cheung exhibit four of the works that make up The Essences of “Watching Soaps”, a work that attempts to demonstrate the untranslatablity of ‘international art english’. They have translated a curatorial text from Lee Kit’s ‘Watching Soaps’(2011) exhibition leaflet through Google Translate and email correspondence with Lee Kit himself, in an attempt to filter his exhibition down to its essence- the universal messages that transcended 58 languages used in more than 50 countries around the world. 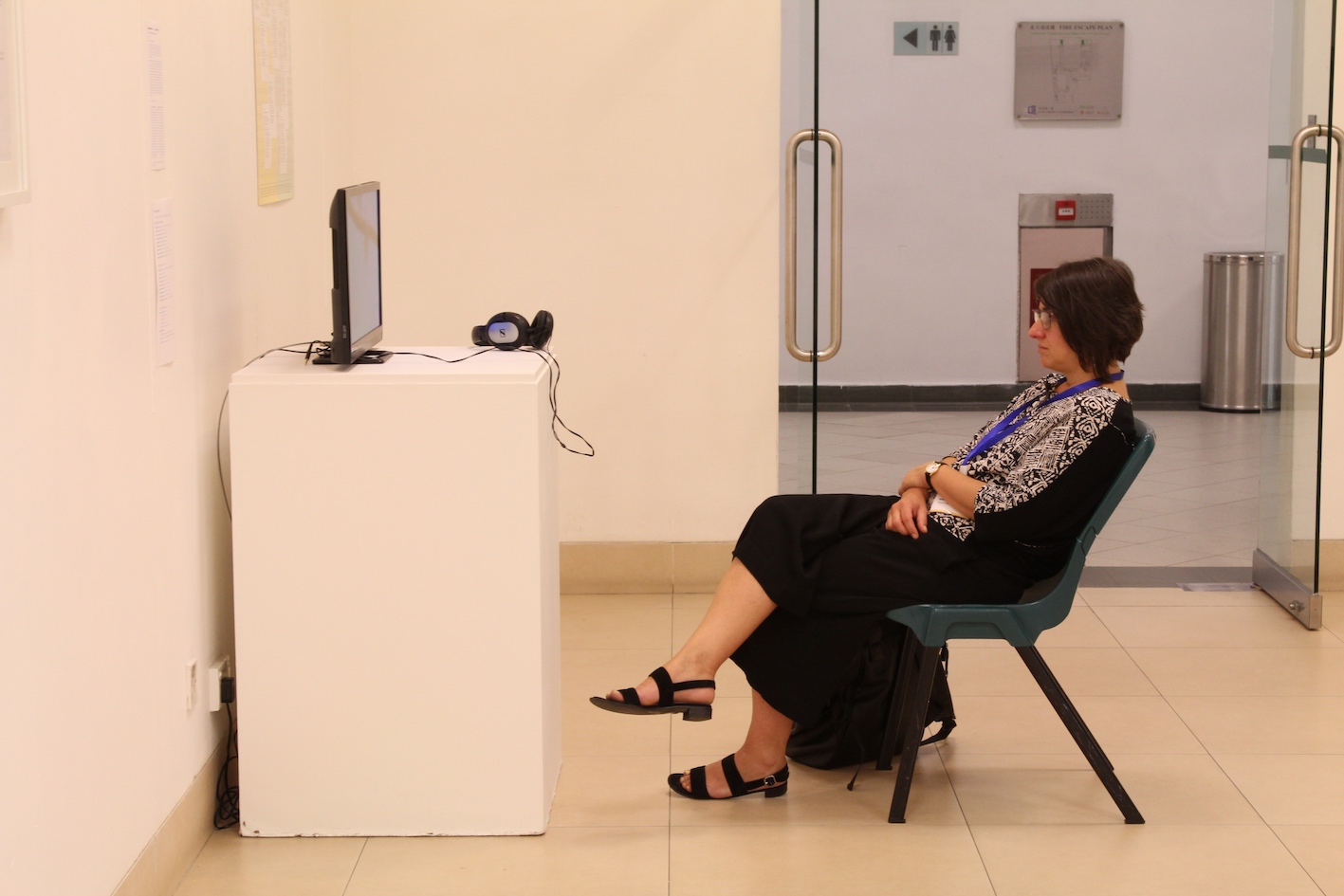 Manuela Perteghella and Ricarda Vidal present, Talking Transformations – Home on the move – an exhibition within an exhibition. A project that explores notions of ‘home’ – challenged and reshaped by unprecedented migration – through translation, film art and poetry, all of which underline the fluidity of the concept of ‘home’. Collectively the works generate cross-media migration routes for both literary and visual artwork and their culturally and linguistically diverse practitioners.

Download booklet for further information about the work and artist’s biographies:

Further documentation and images of the the exhibition and live performance evening can be seen by visiting Translation Zone(s): Hong Kong Exhibition page: TZHK Exhibition.